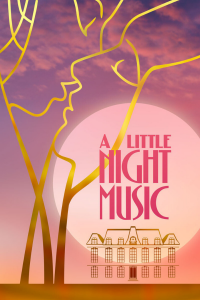 A romantic farce par excellence. Based on the Ingmar Bergman film “Smiles of a Summer Night,” couples meet, part, reunite during a glorious “Weekend in the Country” – all under the watchful eyes of the wry family matriarch and a harmonizing Greek chorus. The beautiful Sondheim score contains his biggest hit in “Send in the Clowns.”

SONDHEIM SWEEP
In what may be the most ambitious venture in our history, 42nd Street Moon is committed to being the first theatre company ever to produce every single professional stage show by legendary composter, Stephen Sondheim. The Sondheim Sweep aims to  present works, both lauded and obscure, either in production or in concert, during every season. We look forward to honoring the reigning master of the musical form for many years to come!