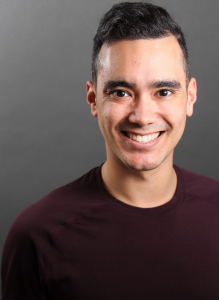 Nick Rodrigues in an LA native who has been acting in the bay for about 10 years. He has been seen performing in San Francisco as Princeton in Avenue Q and Wes in The View Upstairs (New Conservatory Theater Center), William Barfee in The 25th Annual Putnam County Spelling Bee (Bay Area Musicals), and Johnny/Favorite Son in American Idiot (Left-Hand Musical Theatre). Favorite roles include Lumière in Beauty and the Beast (Cabrillo Stage), Hunter in [title of show] (Los Altos Stage Company), Bernardo in West Side Story (City Lights Theatre Company), and Frank Suzuki in Allegiance (Contra Costa Civic Theater). He was first seen at 42nd Street Moon in Hot Mikado, and he is excited to be back on the moon stage with such a talented cast.