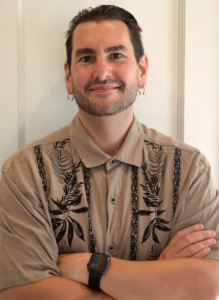 Sean is thrilled to make his debut as a part of the cast of Chess in Concert at 42nd Street Moon.  Most recently he was seen in San Jose Stage Company’s zoom performance of Night of the Living Dead as George and as Amos in Chicago.  Before moving to the Bay Area he lived in San Diego where he performed in such roles as Igor in Young Frankenstein and Lefou in Beauty and the Beast.  Sean earned a BA in musical theater from California State University, Chico.  He would like to say thank you to his family and friends for all their love and support, which helps him bring his love of theater to all of you.