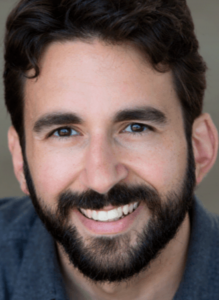 Will was honored with the 2014 TBA Award for Outstanding Performance in a Principal Role in a Musical for playing Frank Shepard in Merrily We Roll Along (Pinole). Other Sondheim roles include: Robert in Company (Altarena), Carl-Magnus Malcolm in A Little Night Music (Lamplighters and Hillbarn), Napoleon the Solider & Alex in Sunday in the Park with George (SF Playhouse), Eddie Yaeger in Do I Hear a Waltz? (Masquers), J. Bowden Hapgood in Anyone Can Whistle (Masquers), and the Younger Man in Putting It Together (Role Players). Other non-Sondheim roles include: Ron & Cat Pate in Iron John (TheatreWorks), Princeton and Rod in Avenue Q for four sold-out seasons (NCTC), Victor Moisa in Nick & Nora (42nd Street Moon), Leo Frank in Parade (Palo Alto), Thomas Weaver in The Story of My Life (NCTC & CCCT), and Trevor Graydon III in Thoroughly Modern Millie (Broadway by the Bay). Find out more at www.williamgiammona.com.